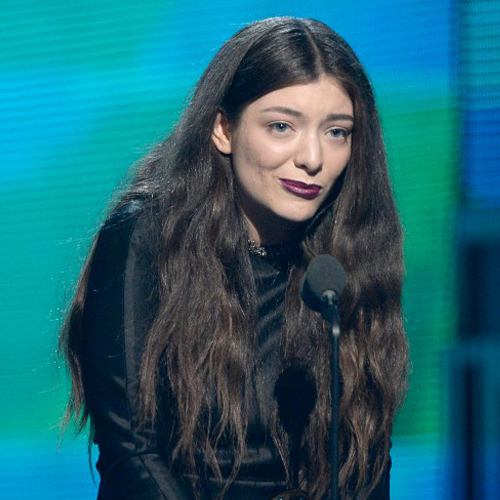 Jason Hodzelmans as Aaron only mimed the rough amputation while two or three actors in Fractious Tash’s grunge production scraped rusty tin trays to create the sound of a saw-blade rasping through bone.

The Kiwi pop star stood close to the stage. She turned slowly to face the other groundlings in the pit. Her eyes rolled up and she sunk gracefully to the floor.

The amputation scene was one of several acts of pantomimic ultra-violence young Shakespeare wrote into his first tragedy Titus Andronicus. The writer gave his Elizabethan audience everything they liked in a show – murder, rape, mutilation, amputation, decapitation, human sacrifice, infanticide, racism and cannibalism.

Fractious Tash even introduced a whiff of incest when Chiron tried to feel up his mum.

The play is set in in ancient Rome. General Titus returns to the capital with captives that include Goth queen Tamora.

her sons Alarbus, Chiron and Demetrius and her blackamoor boyfriend Aaron.

Titus has Alarbus executed as a sacrifice to avenge his KIA sons.

Newly-crowned emperor Saturninus can’t have Titus’s daughter Lavinia for a bride so he takes on Tamora and before long she pretty much runs the show – and the show turns to shit for everyone.

We’ll see this as we trawl through a few productions.

For the Pop-up Globe Titus, Fractious Tash set their production in a stripped back, low-tech, post-apocalyptic-like wasteland. 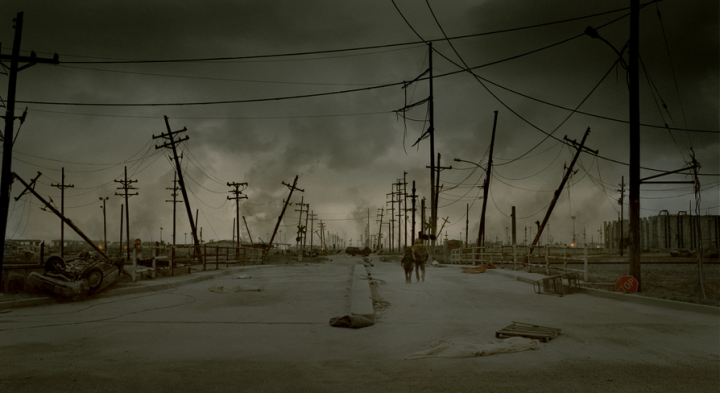 Builders’ planks set on trestles upstage centre suggested a Roman tomb (or pyre). Along with the step-ladders either side of the trestles, the plastic sheeting sometimes draped over the arrangement seemed to be borrowed from the pop-up theatre building site.

Inclusion of the Caribbeanz Southern Stars Steel Band to provide a soundscape was inspired. The instruments bell-like bin-lid percussion chimed naturally with the production. 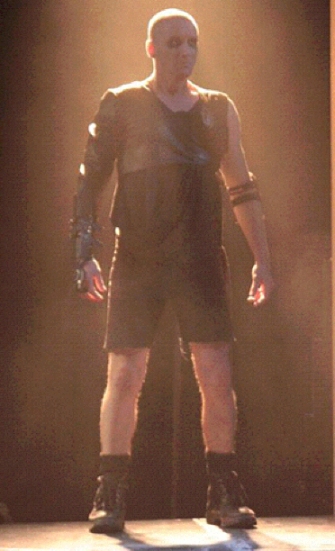 and even the Mad Max remake, Fury Road.

The company mercifully simplified the complicated plot with judicious cuts (to coin a phrase), but Titus loses it anyway when he sees what Chiron and Demetrius have done to his daughter.

When Titus later chops off his own hand in a bid to get mercy for two of his sons, he gets Lavinia to carry the bagged up hand between her teeth.

The self-amputation was a fail too. The boys heads are chopped off brought on stage.
Titus gets his revenge when he grinds up Tamora’s sons and serves them to Tamora and Saturninus in a pie.

Or, in the case of in the Fractious Tash production, moist, red cupcakes

Aaron was not black as scripted in Titus. Instead, he wore a pair of red horns on his head.

To Saturninus’s disgust, Tamora found herself pregnant (a bandaged hand stuffed up her T-shirt provided the surprise bulge) to Aaron, and gave birth to a doll, also with red horns.
A Roman roped a noose around its neck and threw it off the top tier of the seating gallery.

Most memorable though, was potter and stage designer, John Parker’s set. A curved portico of thin pillars upstage suggested the Colosseum. 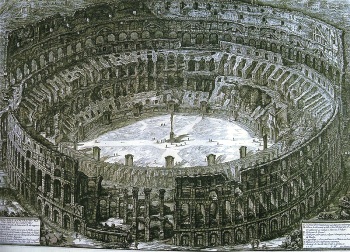 As Titus says, Rome is a wilderness of tigers.

A gas-jet piped through the floor downstage centre provided a small eternal flame which hinted at the sacrificial pyre and the ritual origins of theatre, which began with sacrifice, in Classical Greece.

When Gisborne company Comfy Seat Productions produced Othello in the Marina Park in 1995, we created a similar portico. This was to reference the classical influences in Shakespeare’s tragedy.

We also had a constant burning flame centre-stage but since we bought it from a garden centre we called the eternal bird bath.

The show’s technical adviser Fraser Grout probably came up with that.

When he directed an extract from Titus for a school Shakespeare festival, he called the scene/ highlights from the gorefest performed with great gusto (and uncooperative blood balloons) by students, Tarantino Andronicus.

The white sheet backdrop that draped onto the floor was as much a set as it was a splatter canvas. Crime scene cleaners either side of the set acted as a Chorus. A Chorus is a Classical device, also used by Shakespeare (although not in Titus Andronicus). A group of people, or one person who is a kind of narrator/commentator, are both part of the action and separate from it.

The Tarantino Andronicus Chorus crime-scene cleaners briefly explained what was going on and mopped up.

White sheets were a big part of the National Theatre of Craiova company’s highly stylised, even choreographed, 1997 production of Titus Andronicus at London’s Lyric Theatre Hammersmith.

Directed by Silviu Purcarete, the production’s billowing, secure-ward drapes, hospital beds, and actors in gowns, had the air of a Balkan mental hospital. The actors spoke in Romanian with English FOCON surtitles.

“One fuddled character stares at the election speeches of the late emperor’s sons on two televisions, while another emits high-pitched howls,” The Independent’s reviewer Paul Taylor neatly summed up in his review.

“The howling, the colour scheme of the blood-red and secure-ward white and the scenery of hospital beds and soft hangings remain constant throughout.”

The Goth queen’s diapered sons Chiron and Demetrius were sinister grinning twins who goose-stepped across the stage (on right in picture below).

After they had ravished and mutilated Lavinia, the terrible moment of her appearance before Titus was anticipated by a huddle of actors who faced a bright side-light through an open door off-stage – then Lavinia was wheeled in on a hospital bed.

The production’s crowning moment – the cannibalistic banquet – was played out to the strains of a Mozart piano concerto. Taken away to be tortured, Lyric Hammersmith patrons passed Aaron – naked, roughly wound in clear plastic with a long metal pipe like a lance pushed through the knot of his limbs. The villain cursed departing patrons in Romanian, or in tongues like Robert De Niro in Cape Fear as his character Max Cady is swept down river.

When one bloke hissed at the scumbag, Aaron unleashed a torrent of Tourettish invective and nearly leaped out of his industrial plastic straitjacket to get at him.

A night of armless fun is the tag-line fictional director Dante Nigredo uses for a production of Titus Andronicus in my yet-to-be-published novel Zoo Noise. My fictional characters the Fat Boys are based on the Purcarete’s evil twins Chiron and Demetrius and play the bad lads in Nigredo’s production.

The Fat Boys are Situationist performers and wear sumo-sized nappies as part of their schtick in Auckland’s K Road.

“The twins were a familiar sight on Karangahape Road. They swaddled themselves in giant diapers and pretended to piss in K Road’s anti-art gallery doorways. They sprawled, they squabbled, they leered. They touted themselves as performance artists but they went too far beyond the bounds of decency.”

One of the cool the things about Shakespeare’s theatre is that is doesn’t pretend not to be theatre. London’s Globe actors are encouraged to make eye contact with audience members. Booing villains such as Richard III is part of the show. So when Chiron pulled out the hacksaw from his sacking surgical bundle, I cheered in a traditional Globe Theatre groundling manner .

That’s when Lorde slowly revolved, rolled her eyes up and slumped to the the ground. My doctor brother leaped into action, rolled her into the recovery position. The woman turned out not be Lorde but someone who looked a bit like her.

Ambo people stretchered her out and just in time. Titus was planning the evening’s menu.

Just another night of armless fun at the pop-up.