The Yucatan town of Tahmek is not listed in Lonely Planet and it’s best it stays that way. There are no hotels or pensiones in Tahmek. It is a crossroads, an intersection, a transit point in the screeching jungle.
If it wasn’t for the bullfight in honour of the Pope’s visit to the Mexican peninsula, we would not have got off the bus.

We planned to see the bullfight as part of the Mexico experience, then catch the last bus out to Izamel.
Tahmek’s urban plan was fairly typical – a grid pattern with central intersection. On one corner stood the San Franciscan church. On an adjacent corner was the square. Across the road from the square was the palacio municipal. Near the bottom of the palacio steps was a pop-up beer shelter, a tin roof set on four poles. Men leaned across the table under it.
Instead of the customary cafe on the opposite corner, there was a bull ring, lashed with sugar cane leaves. Sheets of corrugated iron lay on the roof and cane stalks were laid down for seating. No nails were used in the stadium’s construction.
The sky greyed and hunkered down over the town. Thunder rolled in the distance as a three-piece brass band in blue baseball caps led the red and gold costumed bullfighters to the bull ring.
A bony white bullock was pushed through the gate. Matadors chased it around the ring for a bit then it was led away.
A drunk staggered into the ring and slipped into a puddle. The crowd pelted him with cane stalks and he staggered out.
A brown bull charged in and blundered at the matadors. One bull fighter stuck his sword into the back of the beast’s neck. He wounded it some more as a boy walked around the arena to sell baked maize rolled in chilli and sprinkled with lime juice.

When the bull was dead, its ears were cut off and men on small horses dragged its body around the ring. The audience threw knotted canes at it.
We were grimy and tired by the time the show ended. Lightning flickered in the clouds as we waited on the corner by the park for our bus.
Coaches stopped at the intersection then headed north to Merida, south to Campeche or east to Cancun.
A bus trundled into the intersection and snorted to a halt.
“I’ll ask this one,” said Amanda.
I waited with our packs by the wall. Fat drops of rain fell. A downpour was imminent. I grabbed the bags and ran up the steps to shelter in front of the church. Amanda was already there. We were crushed against the wall by the crowd.
I pointed to the beer shelter.
“Let’s go over there,” I shouted over the rain. “We’ll be able to see headlights coming up the road.”
At the shelter, a man from the group dragged a metal folding chair to Amanda and gestured for her to sit. When his mate Renardo, a small man in a torn white singlet and cotton trousers, waded out for another beer, his friend dragged the vacated chair to me and insisted I take it.
Renardo wasn’t knocked out when he returned to find me in his seat.
He circled us warily then held out his beer. I shook my head. An intensive campaign had warned of the spread of cholera up from the south.
Froth oozed over the lip of his can.
Renardo’s friends shuffled towards us. They practiced their good-byes and hellos. They shouted over the rain hammering on the tin roof.
“Where you from!”
“Nueva Zelanda.”
“Where you go!”
“Izamel.”
“Cancun!”
“No, Izamel. We’re waiting for the bus.”
“Cancun!”
Cancun was off our itinerary. A National Geographic writer described it as Mexican as Tex-Mex chili.

Izamel, on the other hand, he said, was unrivalled in its blend of Maya and Spanish colonial. We were going to Izamel. 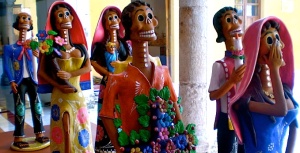 Two drunks dripping with rain leaned over me as the storm crashed all around. They pointed to the town clock and interrogated me about kangaroos. Music and thunder pinched the left side of my brain.
A knotty, white haired ancient in a clinging T-shirt touched Amanda on the arm. He crossed himself and swizzled a bony finger in the boiling sky. Lightning strobed the continent and thunder pummelled the town.
“Our bags floated around our ankles. I lifted them out and piled them on a chair.
Renardo rested a hand on the packs.
“Does he have to lean on the packs?” said Amanda.
Another man pulled him away but when he let go, Renardo fell forward. Amanda pushed him off the packs.
He stepped back, regarded her, then leaned on the packs again.
His mates made a circle around us. Lightning smote the air.
“This could get ugly,” I said. “Let’s get out of here.”
“What about the bus?” said Amanda. “I’m going to wait here. It could come at any minute.”
Renardo swayed at the edge of the shelter. He tilted back his head, squeezed the last drops from the can and crushed it in his hand. Froth flew as he flung it aside. He took one step out of the beer shelter and fell over.
His head rested on the kerb. His mates laughed and helped him to his feet. He swayed for a moment the lurched into the night in search of fresh beer.
“Okay,” said Amanda. “Where?”
“Up there,” I said, pointing to the arched facade in front of the palacio municipal. “Vamanos. Let’s go.”
The colonnade was brightly lit and people who had come for the dance pressed against the wall under the arches. Disco music thumped from columns of speakers by the plaza and strings of light bulbs festooning the plaza dimmed with every flicker of lightning.
The music and plaza lights suddenly cut out.
A boy shimmied up a power pole and clamped a metal spring-jaw to the power line. The music and lights came back on.
A slightly built, moustachioed man in stone-washed jeans sipped from his can as he approached us.
“How… are… you,” he said
“Good thanks,” I said.
“Christ,” said Amanda. “I’m going back down to the road. I’ll be all right. It’s you they’re after.”
Another drunk joined the first. Then another.
“Where… you… going,” they said.
“Away,” I said.
“Cancun!” they shouted.
Renardo swayed at the top of the steps behind them.
The slightly built man tapped my arm and pointed to Amanda. She sat in a chair she had dragged from the beer shelter into the road.
My new friend was on the verge of tears. He pleaded for me to fetch her in from the rain.
I shook my head sadly. “Loco.”
I spun around as a wild skyrocket shot down the street behind me.
“There… are… no… more… buses,” sobbed the man.
The skyrocket exploded near a trio of figures on the road. Temporarily blinded, and with hands cupped over their ears, their silhouettes fell over one another.
I turned back to the light.
Relieved of his burden, my confessor had gone. But Renardo was still there. He turned to take a piss off the top step but lost his footing. His head cracked on the edge of the marble and he lay on the steps, still clutching his can.
He was becoming heroic in his numbness. I helped him up and he toppled down the steps into the streaming night.
The thought occurred to me that this drama would repeat itself every night as it always had. Or, if I returned the next day, the people would have disappeared and the town would be rotted and vined.
I scooped up the bags and joined Amanda.
“It was getting a bit crazy up there,” I said.
“So you thought you’d bring them down here.”
I looked over my shoulder. The three amigos from the portico waited with watery, expectant smiles.
“I don’t want them here,” said Amanda. “It’s your height attracts them. You’ll have to go somewhere else.”
I waded away. “And keep an eye on that couple over there,” she said. “They’ve got a car and they’re going soon.”
I climbed onto the edge of the forecourt. A gas-lit taco cart hissed nearby, a soft phosphor glow in the tinsel of rain around it.
The couple I was meant to keep an eye on had gone. Possibly for the car. More likely for ever.
Thunder rolled through the atmosphere and lightning sizzled in the streets. Rain tattooed the tin roof of the beer shelter but, back at their table, the drinkers hardly noticed it.
Fireworks trailed into the sky from behind the bull ring. One burst on the front of the church. Another shot through the bell arch. People below cheered. The next rocket fell short and fizzed with sparks until it exploded in the crowd.
Headlights approached slowly through the curtain of rain. Amanda stood up. Her hair was plastered down her face and her parka hung from her shoulders.
A small spark in the black map of sky behind her head exploded. Its broken spokes flung across the stratosphere. Thunder crashed overhead and rain came down like it was the end of the world.
I staggered into the street with the sodden packs. The drunks stumbled towards me, arms outstretched. Renardo appeared. His vest was torn and there was dent in his forehead.
He put his hand on my chest.
A Volkswagen beetle pulled up to the kerb.
I recognised the passenger as the woman Amanda talked to earlier. Her husband was drunk. He was also very short and had wooden blocks tied to the pedals. Loose beer cans rolled around under his feet.
Amanda scrummaged into the car.
“Where are you going?” I shouted to the driver.
“Get in!” shrieked Amanda.
Renardo tapped me on the shoulder. I fell into the back seat.
“Cancun,” said the man.
“Vamanos,” I said.