Jim Morrison and the boys were gone on peyote in the desert then Jim was hunched over the microphone singing, Ride the snake / Ride the snake, to the lake/ The ancient lake/ – and down in the front row of the cinema a kid whooped and there was Mogadon, Lizard King, aka Garnus, Moggie, the Mog, Mogadon, a Morrison look-alike, and  a primal screamer.

Mogadon screamed primal to the Stones, Iggy, the Doors. He took what he could to loosen that howl – Jack Daniels, mogadon the barbiturate, amphetamine diet pills, possum trappers’ chemical stun-grenade amyl nitrate. Cactus. There was a lot of cactus on the East Coast. We boiled down limbs of it, strained and drank it, and went bush. I once heard about these guys who lived in an old house in the desert in Australia. Outside the house was a datura tree. The guys boiled its flowers into a tea and drank it. They lived nightmares, went blind and were rocked by chasms between heartbeats for several weeks until they got used to it. Then they started on the leaves and when the leaves were gone they boiled strips of the tree’s bark. When they got down to the roots, they knew it was time to leave. They made life-masks of themselves from a pulp made from the roots. They dried the masks in the sun and hid them in the rafters. Then they all left in different directions.
Mogadon could have been one of those guys.

The trouble with the Mog was, you’d be sitting around drinking in the K’bars’ back room with Bowie, Iggy, the Stones, the Doors, thrashing on the stereo and Mogadon would unleash a howl and you’d just about hit the ceiling.
Moggie’s howl was an animal response to something in the rock but between the cri de coeur, the cactus, and the free association, Moggie’s grip on time and space got loosened up too.
At Rotorua Train Station, he was immobilised on the platform by a two hour deja vu.
At the Regent movie theatre in Gisborne he couldn’t stop thinking. People whispered and shifted in their seats at his uncomfortable thoughts.
In the K’bars’ back-room one time, Captain Zanga asked him (he was babbling to himself at the time, and had been since we’d gone to a fancy dress out at Patutahi Hall. Mogadon wore a lava-lava, a blue and gold scarf wound around his head, a beaded necklace and mascara.
He looked less like Jim Morrison and more like Charlie Manson.
Snotty went in drag. I went as a straight arrow. (Moggie had a problem giving up his fancy dress after the party. So did Snotty but that’s another story.)
“How do you know which voice is yours?” said Zanga.
Without even looking up, Mogadon said: “When all the others are alien to me.”
A couple of the K’bars got into the screaming and free association too but kept falling out of their bodies. Mogadon didn’t seem to have that problem, but Kurt, Boo and Bones found themselves going astral when they least wanted. Boo often woke up to find Kurt crouched on his chest or to see him blu-tacked to the ceiling.
They put it down to the cactus.
I put it down to the cactus, the primal screaming and the free association; the babbling, the drunken tongues.
But when Mogadon went astral, he scared us all with the black dog.
It was a dark and stormy night and the Mog was tucked up in bed. It was the middle of summer so it was a hot and dark and stormy night. The front door was open but the fly-screen was closed.
Moggie heard snuffling in the flower-bed beneath his window.
He didn’t move. The snuffling moved off. It went around the house then came back to the front again.
Then it started running and running around the outside of the house like it was looking for a way in.
Morgan heard the fly-screen bang like a trap then the black dog was standing in his bedroom.
Moggie hit the ceiling, but he didn’t stop there. He went right through it and clung on to the chimney. The storm crashed and zagged all around him while down below the black dog ran around and around and around the house.
We kind of all went our separate ways after that. The last I saw of the Mog was through the back window of Frack’s Mini as Moggie walked up the track to the Krishna camp. I heard later he got kicked out of there and turned Christian. But I saw a photo of him years later. He stood on the beach in red shorts. He had impaled a red and yellow flag into the sand; he was looking at the sun and laughing.
There was a kid in the picture too. Not in the actual picture. In the picture of Mogadon’s new life.
But in the darkened movie theatre, with Jim Morrison hunched over and screaming into Weird Scenes, I imagined one of the K’bars (Kurt!) in there too. I didn’t recognise him at first. It had been a long time. He sat somewhere down the front, and when Jim went primal, he let out a howl in sympathy and my skin chilled and somewhere in the hills back of north Makorori, Mogadon, Lizard King, lifted his face out of the mud, his fins pricked, naked and cold. The sun dropped behind the hilltops as he peeled himself out of an mud imprint of himself and strode over the hills and down to the coast and to the seaward side of Makorori Hill, to the hut Toss built under the dripping beeches where the K’Bars, captain Zanga, Snotty and I were waiting to do it all over again. 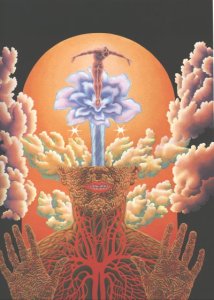